Up until now we have only taken Little Bear away from home once since he moved in. I wrote about it in Our first post-placement holiday. That time, I figured out through my lack of preparation that Little Bear is anxious about holidays and has previously not had a positive experience of them. This time I started talking about the holiday earlier and because it involved the beach he was pretty keen on the idea. I had also told him that on the way back we would be visiting the friends we had stayed with last time. The previous trip to their house had been a very positive experience for him so I knew he would be keen to go back (not least because they have a Nerf cross bow they let him play with!). The difficulty this time was getting him to understand time scales. I tried saying how many sleeps there were until we went but as numbers remain arbitrary for him this didn’t help at all. In the end I went for a very simple timetable, showing how many more sleeps until we went, how many nights we would be there, when we’d be at our friends’ house and crucially that we would then come home. 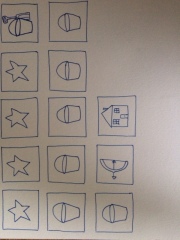 *I have to apologise for that being the wrong way round, I’m too tired to figure out how to rotate it!

Little Bear grasped it well and enjoyed crossing the days off each morning, though he did need some help to cross off the NEXT one and not just ANY one.

The day before we went, amidst the packing chaos, Little Bear got his hands on Grizzly’s battery shaver resulting in this situation (!!): 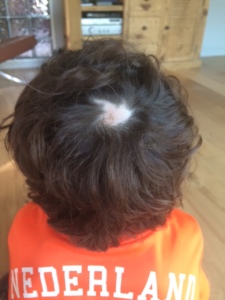 Big Bear managed to trap his fingers in the car door. Was this setting the tone for the whole holiday we wondered?

The evening before we travelled, Little Bear really struggled to get to sleep. He said he didn’t want to go to the beach and every time I went into his room he wanted the world’s biggest cuddle. I kept reassuring him that we would all stay together, we would have fun and we would come home together. I hoped he would be ok once we were there.

Grizzly’s Mum stayed over as she was coming with us.

In the morning, having sorted out last minute cat sitters (we know, bad pet parents!), packed the car, got everyone into the car, gone back into the house to find Big Bear’s cuddly dog, then to find DVDs, then to find the dog again and double checked that Grizzly’s Mum’s car really was locked, we finally hit the road.

As it was our first proper holiday together since having Little Bear and we had no idea how it was going to go, we had chosen to keep things easy by going somewhere we had been to before and knew well. We passed the few hours to Tynemouth without major incident.

On arrival at our self-catering apartment, Grizzly’s Mum undertook the customary nosy sweep of the place AKA seeing what is in all of the cupboards. Within 30 seconds a cupboard door had come off in her hand! Not ten minutes later, she was waving a drawer handle that had mysteriously come loose. Later on we added a broken lampshade and a screw missing from shutters to the litany of mishaps. What with doesn’t-know-her-own-strength granny and miniature monk it was turning into comedy central.

Little Bear fell in love with his pint-sized but perfectly formed bedroom straight away, especially as there were toys in his wardrobe and in particular a cuddly dog that barks and wags its tail. I heaved a sigh of relief.

Once we had settled in we headed to the beach to make the most of the sunshine and there the strangest thing happened. The children busied themselves digging and trying to dam the natural spring and, wait for it, the grownups sat on a rug and did nothing. It was very hard to get used to. The sun was shining, I was lying on a beach and the children were entertaining themselves. That is not life as I know it. It was quite a strange sensation. I believe it’s called “relaxing”. 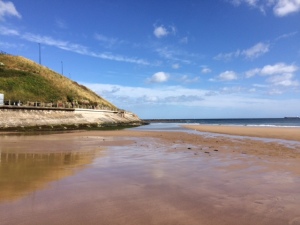 We have been to the beach about 4 times now, a couple of times spending pretty much the whole day there. Big Bear has entertained himself almost the whole time and made some friends in the process. Little Bear has coped exceptionally well. On the first day he managed to join in with the other children as they worked collaboratively to build a dam from the sand. Previously he would not have coped in that situation and would have purposefully sabotaged the building. It was lovely to see him working side by side with Big Bear, having fun and really playing together. It was also lovely to see him interacting in a friendly way with other children he met and not immediately viewing them as a threat.

As the days have passed and Big Bear has continued to dig (the child has some stamina), Little Bear has grown a bit bored and needed more adult help to entertain himself. Apart from running up and down the beach a few times pretending to be a horse with him on my back wielding a stick (“speer”) and paddling with him, I still haven’t had to do much. It has been very surreal but very welcome.

One of my main roles has been wrapping him up in a towel and various other blankets and clothes and snuggling him back to warmth after his many ventures into the sea – a role which I have been more than happy to carry out. 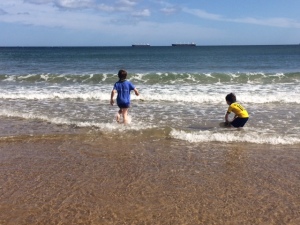 I am feeling pretty spoiled by this holiday in general. The fact that Grizzly’s Mum is here has meant that we have been able to go out (hold your breath) on our own. One evening we put Little Bear to bed then took a little trip to the Metro Centre for a spot of evening shopping. We have been out for an evening stroll. Now, please don’t think that I’m bragging when I say this, but we have also had some lie-ins. I know: it’s AMAZING.

On Tuesday, my parents came to join us for a few days and I became further spoiled when they took me out for tea and Granny and Grizzly fed the boys and put them to bed. My parents offered to babysit the next night but in the end it was raining and we thought it would be more fun to stay in and have a bit of a games night all together. We played Uno Attack and had a great time.

It is certainly a strange sensation for the week to be so easy and to have virtually no jobs to do. The grandmothers keep telling me it’s only right that I should have a break on holiday but it has felt pretty indulgent. I do feel very lucky that we have such a good support network.

So, what else have we been up to? We had a little drive out to Whitley Bay to find an ice cream parlour and ended up having a play in the amusements too. We took all the grandparents into Newcastle to go to The Discovery Museum. Little Bear had a great time playing in the water in the Play Tyne section and we had to change his clothes again (I actually don’t think a day has passed when we haven’t had to fully change him at least twice).

One day we found ourselves near the boating lake and I was somehow persuaded to get in a pedalo. As a non-swimming water hater I thought I was quite brave. It was good fun, though I would warn against trying to operate a pedalo in a skirt, especially if it’s windy. Grizzly said it didn’t matter if I flashed my knickers though as I’m on my holidays! 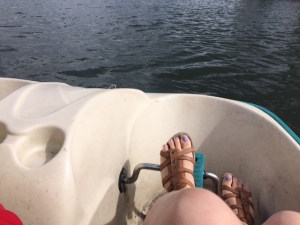 Today the Three Bears and Granny have been to Wet’n’Wild. Needless to say I didn’t join them. I sneaked off for a while to have a mooch in a nearby outlet shopping place then joined them for lunch. On my return it was quite easy to spot them amongst the crowds – I just looked for the little bald patch bobbing around!

After lunch I sat in the café of Wet’n’Wild catching up on my writing. It was quite possibly the hottest place I’ve had to sit in and I bonded with a fellow Mum over how hot we were. She tore me a strip of her newspaper to use as a fan and in the end I resorted to pouring little bits of water onto myself (too much information there, sorry). The Bears had a fabulous time though and everyone was ready for a rest afterwards. Granny and I took our chance to explore some of the little shops in Tynemouth. 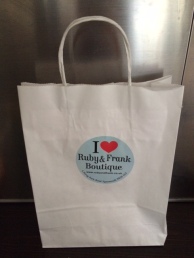 The week is flying by. Just one more day left then we are off to see our friends and shortly afterwards, back to reality..

2 thoughts on “The Bears go on holiday”