It feels like literally 3 seconds since I was sitting here writing last month’s round up but here I am again and November is over. Here are our best bits:

School has largely continued to go well for Little Bear. There have been some incidents but I’m going to count them as positives as I’m really pleased with how school have handled them. All the incidents have taken place at lunch times when there is less supervision and the supervision comes from mid-day assistants, not teaching staff. The incidents usually involve Little Bear playing a game that he shouldn’t be e.g. fighting and the game usually ends in him kicking/ hitting/ biting somebody. From what I can tell, all hell usually breaks out at that point, a dinner lady shouts at him that’s he naughty and drags him to a teacher. Little Bear is unable to explain what has happened or why and he gets punished, not the other child who is usually also involved.

That sounds pretty bad but I spoke with his teacher about it as soon as I spotted the pattern and she had separately spotted it too. She had already spoken to the Head and SENCO to say that she didn’t think the usual system of giving a red card and getting a good talking to from the Head was appropriate for Little Bear. She had concluded that the supervision wasn’t appropriate and that the mid-day assistants needed more support in managing his behaviour in a more constructive way. She asked for my permission to meet with them and explain Little Bear’s needs to them in more detail. She would give them strategies that work in the classroom e.g. thinking time and if they didn’t feel sure about what to do, they could bring Little Bear to her and she would manage the situation. She confirmed that his behaviour is good in the classroom and it is just a matter of handling him more constructively. I did suggest he needed to be watched more closely too because if the opportunity is there, he will get into mischief. I usually ensure the opportunity isn’t there.

His teacher also said “he is not a naughty boy, he just needs more help with boundaries and knowing what is acceptable. I will not have him branded as a naughty child”. That was what I was planning to say but clearly I was preaching to the converted. So yes, there have been a couple of bumps in the road but top marks to school for their sensitive and child-centred handling of it.

In terms of his educational targets, Little Bear continues to make progress. He is secure in his knowledge of Phase 2 phonics so is now learning Phase 3 and working on blending Phase 2 in school. The blending is proving difficult, as I suspected it would, due to Little Bear’s speech processing and auditory memory difficulties. However, he is mostly able to identify the first and last sounds in words so I don’t think he’s as far off blending as I did a few weeks ago.

Now that he has found out what numbers come after 10, he’s got a bit muddled with seven and eleven and the whole sequence has gone a little wonky again… I’m sure we’ll get there eventually!

Little Bear has discovered pens and has even requested paper a few times recently. He is making some good first attempts at mark making now.

I am super proud of how he is getting on as always.

I have mainly been making Christmas decorations (our first craft fayre is tomorrow), cups of tea for builders and doing Christmas shopping. I have run another Communication Workshop which went well but we are now on a mission to improve marketing and hopefully get more people next time.

We have made quite a lot of decorations for our tree now, with some help from Little Bear and I for one can’t wait to get a tree now. Here is a little selection of some of the different things we have made: 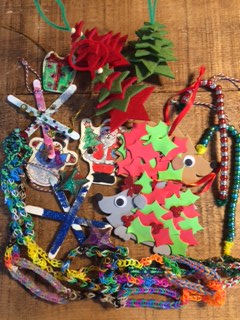 The builders are in! Well, in fact, they are out. They are building the outside parts of the little extension we are having at the moment and they are going to wait until the New Year to knock through. Thank goodness! So far, it’s fairly painless and they are nice guys so apart from making a few decisions about where windows need to go etc. and making hundreds of cups of tea, it hasn’t really caused me any stress. It means I can do my favourite bit which is picking paint colours etc. Hopefully by the end of January I might be able to show you.