I have decided while I Am Writing to post some shorter blog posts for a few weeks about some products we have bought recently.

This week’s product is the Dinner Winner plate made by Fred. 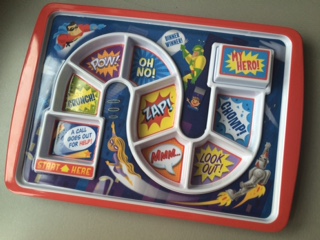 Meal times have always been a bit tricky here, ever since we first met Little Bear. I suspect his development was disrupted around the weaning stage and when he first arrived I probably should have gone back to basics with introducing solids and different textures. He was over three at that point though and I was pretty distracted by many a pressing behaviour challenge. I did do purees for him and I have fed him on and off since.

Little Bear is six now and at mealtimes, especially tea time when he’s tired, he tends to mess with anything and everything but doesn’t focus his energy on eating. He will clamber over the bench, fiddle with his cutlery etc. but not touch his food. It has always driven us a bit mad but we have tried to be patient and to feed him if that’s what he needs.

I wasn’t looking for another solution but a few weeks ago I was flicking through a therapy magazine and came across these Dinner Winner plates. I immediately felt it would be worth a try because it is essentially a visual support for eating your meal. It evidently struck a chord with the speech therapist in me: it’s such a clever and practical idea and I couldn’t believe I hadn’t seen one before. We found you could buy them on Amazon and one was with us the next day.

There are lots of designs but I chose the superhero one as I felt Little Bear would like that one and it was a bit more grown up.

On the first day, the plate worked like a miracle. Little Bear LOVED it, especially the fact that there is a compartment with a lid for you to open at the end of your meal and hopefully find a treat. I explained to him that you start at the beginning and eat one compartment at a time. There was a risk Little Bear wouldn’t care about the order but he took that aspect very seriously and finished his dinner in record time. I don’t want him to rush but tea it is usually a very lengthy affair so this was a clear improvement.

The second day was similarly wonderful. After that, the novelty wore off a bit. However, I can honestly say that though the plate hasn’t delivered a miracle it has certainly improved things significantly. I think Little Bear is much less prompt-dependent now. Previously I had to prompt every mouthful or load his fork for him but now he does often feed himself the whole meal, without prompts, just with a bit of dithering between compartments. I now wonder whether seeing a whole plate of food was overwhelming for Little Bear and he was having difficulty breaking the task of eating into parts. The plate has done that for him and one compartment at a time is not overwhelming. Also, when one has gone, counting the remaining compartments gives a natural countdown to being finished which seems to help Little Bear with seeing an end to the task. Sometimes we are winning at dinner.

I don’t think the treat at the end would be appropriate for all children, depending on their issues with eating but it does work for Little Bear. One chocolate button seems to be motivation enough.

On a practical level the plate requires a bit more preparation from me. I tend to serve his food onto a normal plate to check I’m giving him the right quantity and then I need to chop it up and divide it between the compartments. It is a bit more faffy but I feel as though it is worth it. The first meal he had on it was baked potato which obviously had to be modified a bit more than usual!

Overall I think it’s a fabulous piece of design and a really clever use of visual support. I would definitely recommend it and this is not one of those blog posts someone has paid me to write!

As an added bonus, Little Bear practises his reading on the words written in the compartments. It’s a big thumbs up from me and my little dude.