Back in March I wrote this blog: Interoception   At the time, I promised I would have a go at working on interoception with Little Bear at home and I would report back about how we got on. Another random Twitter chat has prompted me to do that this week so here we are!

I began Mission Interoception by buying this book because I struggled to find any practical information on the internet: 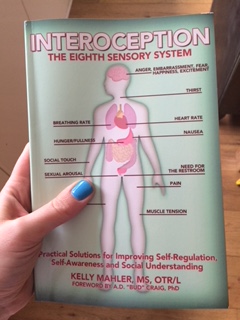 It is quite informative but it is also very expensive for what it is. I was expecting a sturdy text book for the £24 I paid, not a thin novel sized book which I was able to read in one sitting. Although the content is quite helpful, I didn’t find it revelatory. The basic premise of interoception remains the same as I thought before: we need to get children more tuned-in to things that are happening inside of them. In order to do that, we need to get them thinking and talking about what’s inside. A key part of interoceptive therapy seems to be describing how different parts of the body are feeling and this is where we ran into a bit of trouble. Little Bear has well-documented speech and language difficulties and it soon became clear that coming up with lots of different adjectives to describe parts of his body he doesn’t really know are there is fairly challenging. In fairness, if I make myself think of how to describe my stomach for example, when I’m hungry, I’m not sure how many adjectives I can really come up with either. Working on interoception has several pre-requisites I’ve discovered and good language skills are one.

The book gives quite a few different activities to do but they are essentially all just different ways of making a child think about a specific body part (a grown up points at different bits with a light sabre/ you draw a picture of your child & point at different bits of the picture etc.). As with most things, I picked the bits I liked the most or thought would be the most fun or the most practical and we had a go.

The book suggests that a good starting activity is to draw around your child (who will be lying on a large piece of paper – wallpaper or lining paper is ideal), get them to help you mark their different organs on their body map and then talk to them about how different ones feel in turn. We enjoyed the drawing around each other part – I roped Big Bear in too to make it a bit more fun:

It was at the stage of marking the organs on the map that I realised there was another pre-requisite skill that we were slightly lacking. Your child kind of needs to know what’s inside of them. Not complex anatomy but stomach, lungs, heart, brain, bladder, bowel are all fairly crucial to this. Little Bear seemed to find the drawing around each other part quite overstimulating so between that and not really knowing about the organs, he quickly lost attention for the task. If you were hoping for the kind of blog post where everything goes swimmingly and I resolve my child’s difficulties overnight, you have come to the wrong place.

My conclusion after this was to shelve direct work on interoception for a while so that we could fill in some anatomy blanks. Little Bear’s birthday was around this time and always wanting to get something a bit educational in amongst the fun stuff I had got him this:

I found this a much better way to think about insides with Little Bear. The model is good because you can take the transparent plastic ‘skin’ off then ‘dissect’ the man with the tools provided. There is a labelled sheet with blank spaces for you to match the 3D organs up with their pictures. It felt quite a bit more rock’n’roll than drawing on the paper which meant it grabbed my boys’ attention more and they engaged with it better. Over time I linked the items they were removing from the unfortunate plastic man to their own body parts. Sometimes I would hold a bit up and ask if anyone knew where it was on their own bodies. We began to talk about what the bits did and how they worked. We re-visited this task every so often to re-inforce the information. 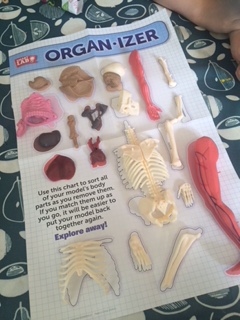 Alongside this, the book I bought advocates working on interoception ‘on the fly’ i.e. just at random while out and about, not solely during an interoception task. It also suggests trying to apply interoceptive learning at points of dysregulation, though it points out this is difficult. I realised I was guilty of identifying out loud that Little Bear was hungry or needed the toilet but I wasn’t really arming him with the skills to identify this himself. I tried to add in a bit of interoception on the fly at these points. For example, I might say, “We need to get up now; its breakfast time. How is your tummy feeling?” Little Bear might struggle with the vocabulary so I would sometimes give him a choice of possible descriptions e.g. is it full or empty? If his tummy rumbled, that was brilliant and an opportunity I tried to seize. The first time I tried it, I said, “What was that noise?” and Little Bear very earnestly replied that it was a bear. I suspect he knew full-well what it was but it is possible, with my interoception hat on, that he couldn’t identify that the noise was coming from inside of him.

Over the last months I have tried to tune him into these little signals, as well as things like how his behaviour changes when he needs the loo or is hungry. I describe the changes I see to him and try to get him to feel them e.g. “You are talking really fast and jiggling up and down. I wonder if that could be because you need the toilet? How is your bladder/bowel feeling?” I might put my finger on his tummy to help him focus on the right place.

I think the most significant thing we can now (sometimes) manage is getting Little Bear to pause, even for a few seconds, to consider his body. I can’t pretend it works every time or that when he pauses he can read the signals but certainly sometimes he is now able to stop and try to tune in. This doesn’t sound like much but I think that interoception is something that takes a long time to change. We are chipping away at it and maybe in a year’s time I’ll notice bigger changes.

One thing that has changed is that Little Bear has become aware of his heart and how fast his heart is beating. We haven’t targeted this directly so I do think it’s a sign of improved overall interoception. The fact that Little Bear is able to lie still and be quiet enough to notice his own heart beat feels like a positive step in the right direction. He can use his breathing to slow it down and notices when it speeds up, neither of which he could do before. He seems to have gained this awareness by himself, perhaps as a result of being more aware of where his heart is and what it does. I have seized on this where possible to link the changes in his heart rate with his feelings/emotions, especially when he feels angry. I have explained why I encourage him to do his ‘Ronaldo breathing’ at these points.

A couple of times, Little Bear has been getting grumpy and heading for meltdown when he has managed to say, “Mum, I think I’m grumpy because I’m hungry”. This is brilliant and obviously I have fed him straight away. It’s far from consistent though and I would say that the majority of the time it is still down to Grizzly or I to interpret his behaviour to figure out things like hunger or needing the loo.

With regards toileting, this is the area we have had least success with in terms of interoception. The majority of the time Little Bear doesn’t seem to know he needs a wee until he is wet and then sometimes he isn’t always aware. This is the area that would make the biggest difference to him but I wonder if there is a hierarchy within interoception, with some body parts being more difficult to tune into than others.

Overall, I would say we are making progress but it is slow and steady. I guess it might be quicker if I chose to focus all my efforts on interoception for a 6 week period and did a little every day. It is hard to give it that level of focus though when we have so many other areas that also require our attention.

On a related but slightly tangential note, I have noticed significant improvements in Little Bear’s sensory seeking behaviours recently. I suspect it is since he has had his Our Gym Bar Invention. Initially he used it all the time, for lengthy periods – mainly hanging upside down – but he rarely uses it now. I wonder whether he has had sufficient proprioceptive and vestibular stimulation that he has been able to re-organise those brain systems. It was particularly noticeable during the summer holidays because there were quite a lot of days when he didn’t do any vigorous exercise, just walking, and he was absolutely fine. That could never have happened even a few months ago. Every day he needed a good run around or swim or bike ride or to climb something or we would have been in for trouble. I can genuinely say that has changed which fills me with hope that sensory diets do work. We still see dysregulation but it’s less physical than it was.

My belief is that interoceptive work will be effective too but it’s a long game. Perhaps if I’m still blogging in a year’s time I could give you another update then.