With absolutely no mention of decorating downstairs toilets this week, I am back talking about the serious matter of children’s speech, language and communication needs – SLCN.

Last year, I wrote this post – Ensuring Children’s Speech and Language Needs Are Met: A Call to Action– about The Bercow10 report – a damning reflection of the state of speech and language therapy services in the UK and the enormity of unmet need. RCSLT and ICAN last week began a new campaign highlighting the changes that have been successfully brought about in the year since Bercow10 and asked for renewed efforts to speak up for SLCN.

Of the 47 recommendations made in last year’s report, 17 have already been fully actioned, which is a promising start.

You can see some of the key successes here: 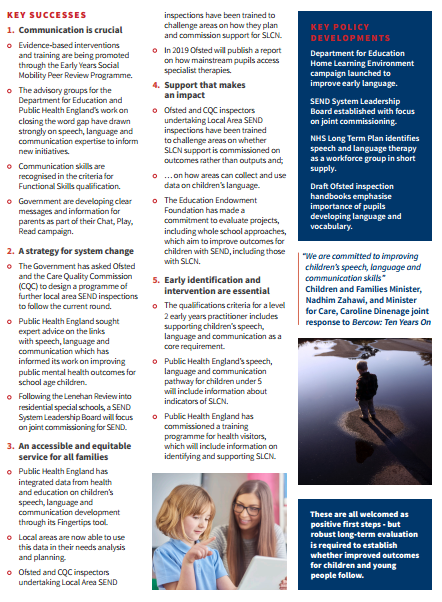 I mentioned the petition begun by @GillianRudd at the end of last year’s blog post. Following an incredible effort, this was successful, gaining 11,622 signatures and leading to a debate in Parliament. The government have stated they are committed to meeting the needs of children with SLCN, and Teresa May herself has committed to change during Prime minister’s question time.

However, there is widespread agreement within the speech and language therapy profession that this is not enough. Budget cuts have decimated speech and language services up and down the country. Yesterday, there was an article in the Daily Mirror about children languishing on waiting lists for as long as a year before getting any sort of meaningful help (see Mirror Article). The NHS department I used to call my professional home no longer exists – its contract having been lost to a private provider – and those children I work with in independent practice talk of long waits, minimal input and quick discharge in their NHS services. I never thought I would have to end up working privately to be able to give children the quality therapy they deserve and part of me is still saddened by it, not least because private services are out of reach for so many vulnerable children who need them.

Pressure on NHS speech and language therapy departments has been growing over a number of years, with an increase in need and a decrease in funding. Clinicians are under pressure to move children through services as quickly as possible and to be inventive with the budgets they do have. The department I worked for, put a heavy emphasis on others, such as speech and language therapy assistants and teaching assistants, carrying out therapy with children. This was part of being ‘lean’ and making savings but ultimately I think it has devalued the work and knowledge of speech and language therapists and contributed to the demise of services. We also worked to an ‘episodes of care’ model, in which children were seen for a block of therapy to target a specific aim and then discharged, with the plan for them to come back again when they needed more. Although this was effective for some children – the ones whose parents or school would make sure they did come back – I’m sure it put vulnerable children with poorer support networks at increased risk. Although the service was designed for children to come in and out of, I think it gave the message to some people that nothing else could be offered and that children’s needs had resolved, where they hadn’t, and were unlikely to for their lifetime. In trying to be frugal, I suspect some services have inadvertently misrepresented the severity and long-term nature of some SLCNs as well as lessening children’s chances of getting the additional support they needed at school (funding is difficult to justify if a child isn’t actually under any external services).

As it stands, Little Bear has also been discharged from speech and language therapy. He too could be re-referred but that would require energy I’m not sure I have. I would need to prove his needs were severe enough to get through referral criteria and no doubt start back at the beginning of the initial assessment to waiting list process again, which took a year last time. He clearly does have ongoing needs – he has Developmental Language Disorder – but proving the daily impact on him would be difficult now his needs are more subtle. Like any parent of a child with SEND, I am already pretty stretched with managing behaviour, seeking funding, trying to get school to understand his needs etc. etc. I’m not sure that I should have to jump through hoop after hoop to get him the help he needs. Yet I would have to. And so too do parents of children with SLCN in all corners of our country.

For me, it has been far easier to create a speech and language therapy programme for Little Bear myself and to train his TA to carry it out myself. Clearly this is a perk that other parents cannot rely on.

The majority of clinicians want what’s best for children and many are deeply frustrated by the limits of the services in which they work. In an unprecedented move, RCSLT and ICAN wrote an open letter to government last week, asking for SLCN to be given the attention it deserves. It was countersigned by 60 organisations, ranging from Autism charities to fostering and adoption charities, who share a deep concern about the future of children with communication difficulties. You can find it here: Open Letter

Five key areas requiring change have been identified as priorities for action and are the five areas the open letter asked the government to act upon. They are:

Joint commissioning of Services – as SLCN impacts upon children’s emotional wellbeing, education, future employability and likelihood of involvement with the criminal justice system, a joined up approach to meeting need would be ideal. It is hoped that this would also help to iron out the postcode lottery which currently exists in the provision of speech and language therapy services.

Long-term support for SLCN – although support has improved in the early years, support for the 10% of older children and teenagers who will have ongoing needs continues to be poor.

Professional Development – there is a pressing need for all teachers and those working in the field of childhood mental health to be aware of SLCN and the many ways it might present. Professionals need to be able to identify SLCN and be aware of clear pathways to support.

Incentivising schools – budget cuts are impacting on education settings too. In these times of reduced funding and fewer EHCPs, it is imperative that schools are supported from the top down to identify and meet SLCN. The anniversary report asks for provision for SLCN to be considered during Ofsted inspections.

Supporting vulnerable groups – as children who have been excluded from school, those in Care, those with mental health difficulties and those who are involved with youth justice are more likely to have SLCN and are more at risk of their needs going unidentified, improvements need to be made to the support available for these groups as a priority.

This is the main area where I have tried to make an impact – providing training workshops for adopters and prospective adopters to arm them with knowledge of communication development; how to identify red flags and what to do to best support SCLN at home. Myself and another speech and language therapist adopter have also written a social communication group specifically for children with trauma backgrounds which is currently being advertised. It is good to see that work is beginning to happen with children who have experienced, or still are experiencing the Care System in other areas, and training for speech and language therapists in this previously neglected area is becoming more common too.

There are pockets of hope but in short, our work is far from done. RCSLT and ICAN are asking for our ongoing activism. We need to continue speaking up for communication and for children with speech, language and communication needs. We cannot stand by and do nothing.

If you would like to help, here are some things you can do:

Perhaps if we all shout loud enough, real change will happen.