A couple of years ago I wrote this blog post about some activities we had road-tested for keeping the boys busy during the long summer holiday: Summer Holiday Activities . At the time they were 5 and 8. Two years on, they are now 7 and 10 and I am having to be increasingly inventive to keep them engaged. Although we do go out and about quite a bit, I also like to do some calm activities with them at home. LB needs as much encouragement as he can get to sit down and concentrate on something; I think creativity and STEM activities are of huge benefit and tend to be neglected at school and it’s nice to have a bit of time where the three of us do something together (this all usually happens while Grizzly is at work). So, here are some of our recent favourites:

We have had a few of these sets but the one pictured that I picked up in The Entertainer is by far the best in terms of value for money and the amount of time it kept the boys busy for. You can do it inside the box so it isn’t too messy and who doesn’t love a destructive task? Both boys have loved donning their protective glasses and getting stuck in with ‘real tools’. Pretty good for channelling some pent up aggression too, I reckon. Just mind those fingers.

I’ve bought canvases for the boys to paint on a few times now (you can pick them up really cheaply in The Works) and they have enjoyed painting on a more ‘grown-up’ surface than plain old paper. This time, I happened on some black ones in Sostrene Grene (I LOVE this shop – its brilliant for crafty bits and bobs as well as just generally lovely) and as we already had some neon paints from there we were away. I found some black card in the cupboard too which proved handy – LB doesn’t spend long on his paintings and without fail wants another canvas. I didn’t have one but the black card extended the activity for another ten minutes or so. A fun twist on a classic. 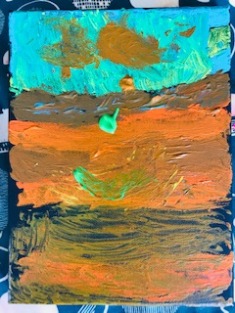 I found this experiment on Pinterest and swiftly nicked it because we have eggs from our hens and anything science-y tends to grab the boys’ attention. You fill a jar with half vinegar and half tonic water. You put as many eggs as you want in (leave them raw), close the lid and leave for 48 hours.

When we opened the jars up again, we were amazed to see that the vinegar had dissolved the egg shells and the quinine in the tonic water had caused them to glow. The glowing isn’t immediately obvious on a sunny day but it’s pretty impressive when backlit by a torch. Miraculously, the eggs don’t fall apart without their shell – the membrane holding them together remains intact – and they feel really strange and rubbery. The boys enjoyed poking and prodding them and eventually popping them just as much as the experiment itself.

The picture on the left shows a normal egg with one we’ve experimented on. We are holding a torch to it but when you do that to the normal one, nothing happens – there is no ‘glow’ at all.

I think this one gains you good parenting points because my two couldn’t predict what would happen and were genuinely impressed I knew how to make an egg glow. Thank you Pinterest.

Of all the activities we have done, the set for this one is the most expensive. I decided to invest because it had enough stuff for all three of us to have a go and with a bit of investment in ink and polystyrene you could give it real longevity. Also, we have done almost every form of craft known to humanity and who doesn’t like something different?

The boys found it easy to create their design with a sharp pencil on their polystyrene tile and this kept them focussed for quite a while. LB in particular loved the roller and the ink and had a great time rolling ink onto his tile. I don’t think the results are spectacular but these activities are more about enjoying the process. I do think they would make nice cards though and had the set have included more ink colours, I think we could have got even more creative. That said, we’ve washed the tiles and they can be re-used. We also have 3 more spare ones so I’ll be putting this away for a while (long enough for them to forget about it) and whipping it out again in a future holiday when we need entertaining again.

Creepy Crawly Clings and other sets

Towards the end of the summer term, I often have a mini-panic about how I’ll keep the boys entertained for 6 long weeks so keep my eye out for any unusual sets or activities that we haven’t tried. I find The Works has good ones and occasionally there are things to be found in Quality Save, B&M or even the supermarkets. This one involved mixing various potions together and leaving them to set over night. The result was sticky insects which caused a high level of hilarity when I let the boys stick them to the patio door. I have to admit that this led to over-stimulation as the ‘sticking’ turned to throwing which turned to pelting and insects hanging from the ceiling and falling on people’s heads. That was probably inevitable. Anyway, if your child can manage such things without said fallout, this one is fun.

We have also tried crystal growing, erupting volcanoes, make your own bouncy balls, grow your own pet, hatch a dinosaur egg, paint your own gnome/birdhouse/money box/ dinosaur etc. They all have their merits. 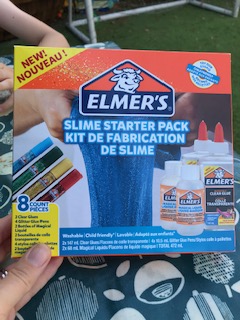 I have been avoiding slime kits because many of them have high levels of Boron or Borax in them which has been linked to burns as well as irritability, digestive problems and even infertility. However, LB was bought this Elmer’s set for his birthday and I didn’t want to waste it. The set says its non-toxic and my Googlings suggest it contains only trace levels of Borax, compared to some sets which have been found to have five times the safe levels. I also knew we wouldn’t play with it repeatedly – just spending a fun hour or so with it one afternoon.

BB didn’t get involved with this one – he was out having fun with a friend – but it was good to have up my sleeve as something exciting for LB. Again he loved the scientific nature of the measuring and mixing and wondering about what might happen. The results were as gross and as sticky as you’d imagine and LB loved it. I do recommend this but with caution – don’t buy a dodgy set and do your research – no slime is worth chemical poisoning!

I hope you like our ideas – do let us know if you try any. I have to end by confessing that not all our activities have been successful. We tried chromatography first with white carnations and then with sturdy lettuce leaves but neither was successful. Everything died before it changed colour, so, err, maybe don’t try that one?! We might have one last ditch attempt with celery but I think it has to have leaves at the top which is quite hard to come by. Any advice for getting things to successfully change colour would be very much welcomed.