Apologies to anyone who has come here looking for adoption or communication-related content – I’m having a temporary hiatus. Or perhaps just an interior design interlude. As many of you know, I love a bit of creativity and sometimes use it for the purposes of self-care or just for fun.

A while ago, I was inspired by Dick and Angel’s Tower of Curiosities on Escape to The Chateau and got the notion (as I do) to turn our barely bigger-than-a-cupboard downstairs loo into a mini-museum. It was painted pale yellow at the time and was pretty boring, so why not?

It took Grizzly and I quite a long time to curate a collection of items and fittings that would create the feel we were after. We were keen to source things from flea markets and antique shops so there was quite a bit of luck involved as to what we could find when we went rummaging. Consequently it took about six months to get everything we needed and only about a day to transform the room (quick lick of paint and hanging everything up). Here it is: 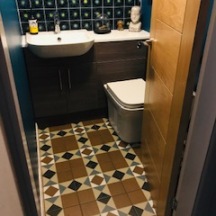 The walls are painted in Teal Tension by Dulux. I was worried it would be too dark for a small space but it’s perfect. The floor tiles are from Topps and add to the Victorian Apothecary vibe. The wall tiles were an eBay find from a few years ago. They’re 1970’s and hand-painted. They are clearly not fitting with a Victorian theme at all but I don’t worry about sticking to an era – if I like it, it comes in.

I like the bright yellow in the tiles and have pulled it out in some accessories. 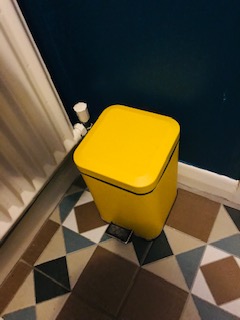 I like the slightly macabre, freakiness of Victorian museums/ collections of curiosities/ medical equipment and wanted to create a similar vibe in the downstairs loo. We saw things in some flea markets that went one step too far – a pickled kitten, anyone? I didn’t want to actually give the children nightmares but I did fancy some taxidermy and random items that might make the mind wander: 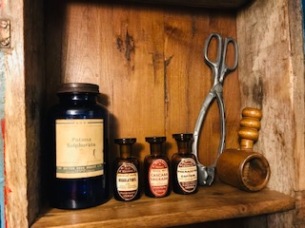 I didn’t want to ruin the vibe by sticking in an Ikea loo roll holder or towel rail (like we had before) so we tried to find something vintage/ different for them too:

For some reason, I’m good with dead bats but chopping the hooves off a deer to make a hook is one step too far for me, so I’m pleased to say the deer feet hooks are fake. 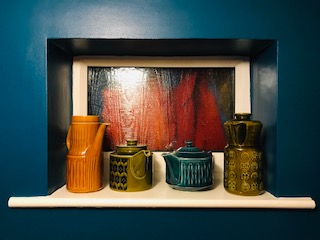 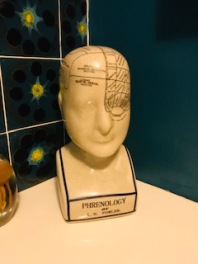 I don’t think the bathroom is fully finished. Unfortunately, I’ve run out of surfaces to display things on so I had to pass up an old doctors set which I found the other day.

However, I’m still on the hunt for things to display on the walls. I don’t know what yet, I’ll know it when I see it. I like the ceramic parrot – he isn’t easy to notice as he’s the same colour as the wall – but I like that he adds texture and might be a bit of a surprise. I also have an idea to either paint a mural or buy gold letter stickers to write ‘musee’ (with the accent, if I could find where it was on my computer) down the left-hand wall. That’s the fun part about this type of design – it can evolve. 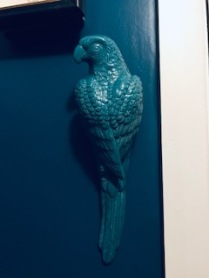 I hope you enjoyed a little nosy. Back to normal service next time. 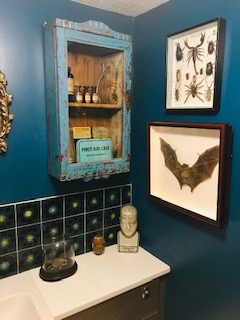